Cat café hangouts are a thing, and one is coming soon to a perch near you. The first cat café opened in Taiwan nearly 20 years ago, in 1998. Shortly thereafter, another location opened in Osaka in 2004 and the concept has spread rather rapidly from there. In fact, Forbes has called cat cafés a national obsession in Japan. Seems like rather strong language, but it made me want to learn more.

Cat cafés all follow a pretty similar format. A visiting cat lover is usually charged an hourly admission rate that falls somewhere between $4.00-$10.00; some cafes generously include a coffee drink within that fee. Health codes mandate that food is prepared and packaged in a separate area from where cats carouse, many cafes have opted to bring in food from outside bakeries for ease. Kitties roam free within the space and most are adoptable, which makes visiting a cat café a feel good and do good experience for all parties. 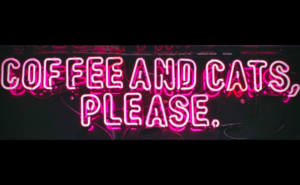 What started in Taiwan, and then spread to Japan, has become a global trend that continues to bring more and more cat cafés to cities near and far. Europe adopted the trend from Asia and now cat cafés can be found in Australia, New Zealand, the Middle East, plus North and South America. The United States has seen a big “boom” in cat cafés since 2014, the number of independently owned locations now nearing triple digits. Perhaps a national chain is next, but in the meantime, the North American Cat Café Embassy serves as a hub for all locally owned cafes across the country. Yeah, it’s a thing.

Cat cuddles and a cup of joe might be just what we need to stave off stress and disconnect in an increasingly plugged in society. After all, more than 70% of Americans admit to being over-stressed. Cats, according to one UCLA psychiatric study featured on WebMD, are proven to help combat human depression and reduce tension. On a less serious note, these cat cafes are a sweet way to enjoy some lighthearted downtime and a scratch or two behind the ears. The names of the cafes are particularly clever, rivaling beauty salons for the “punniest” names on the planet. Here are a few favorites… 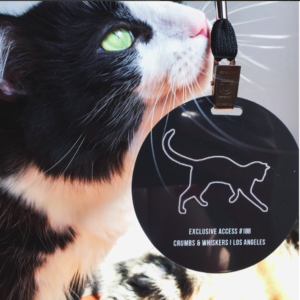 Kitty-themed events and speed dating add to the allure of this $15 an hour experience (1 drink included).

The largest café of its kind, this Austin-based cat café has room for 40 adoptable cats to roam. Neighboring food trucks offer good eats for the cat obsessed.

Been to a kitty café in your neck of the woods? Drop me a comment.