It’s time to scratch out that holiday wish list- Nike self lacing shoes are headed our way. In a few short months, Nike will introduce adaptive performance footwear to the masses with their HyperAdapt 1.0. Available in three colors, the shoe is as fashion forward as it is technologically advanced, and ready just in time for the 2016 holiday shopping season.

The engineers at Nike have been working their wizardry on adaptive lacing technology for over three years now, since 2013. The technology was first introduced to support a limited-edition of Marty McFly’s auto-lacing Nike Air Mags in celebration of Back to The Future‘s 30th anniversary in 2015. While that may have been a novelty, Nike is now banking on this future-driven feature as a way for athletes to get a more reactive and customized fit from their footwear. All of that technology is hoped to boost endurance, agility and focus for athletes that demand a lot from their shoes. 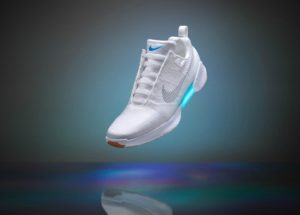 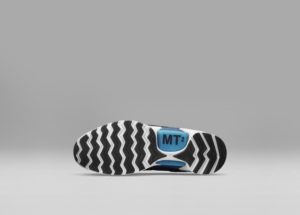 The Hyper Adapt 1.0 features a battery-powered lacing system that reacts to embedded sensors in the shoe’s skeleton. The sensors determine optimal foot position and pressure, tightening the laces to accommodate movement while promoting stability. Over time, the shoe actually learns about the wearer and begins to quickly, and automatically, adjust to the perfect position of the athlete. Until then, buttons on the outside of the shoe allow the wearer to tighten or loosen the laces as needed. All of this is accomplished via Nike’s proprietary Flyweave and Flywire technologies.

According to a review on Sole Collector, the shoe will stay powered for about two weeks before a battery recharge is required. And yes, they really do light up. As a snail’s pace runner, I’d probably opt for lights out…I’m not sure I need to draw any more attention to the speed at which my feet move.

Can’t bear to lace your own shoes? Nike self lacing shoes, the Hyper Adapt 1.0, will ONLY be available to Nike + members. Make sure you’ve signed up.

Written By
Nikola Cline
More from Nikola Cline
A spark that turned into a collaborative fire of creativity, that’s Fredericks...
Read More