The modern Zelectric Motors‘ Bug delivers more than double the horsepower of the stock Beetle. But with electric cars, horsepower doesn’t really tell the story. With Zelectric, it’s all about torque. 120 pound feet of it to be exact. While it can be driven as effortlessly as an automatic, the Zelectric offers the exclusive 4-on-the-floor option of selectable torque – a feature not found in any production EVs today. Doing it differently, is definitely Zelectric’s jam.

For a look under the hood at the fascinating Zelectric Motors brand, we are proud to connect with Bonnie Rogers, RetroFuturist, and her partner, Zelectric’s CEO, David Benardo (pictured below). Buckle your seatbelt for one of Brandettes’ most fascinating interviews yet… 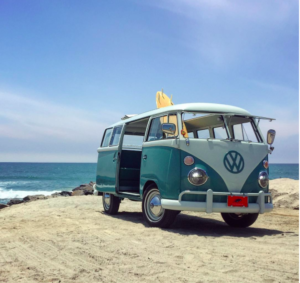 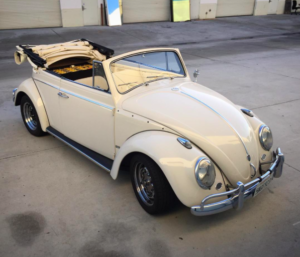 What was the tipping point for Zelectric Motors? How did your love for VW translate into a real live business?

David and I have been happily partnered in life and business for a few decades now. But long before we ever met, coincidentally, as teenagers, we had each first learned to drive with a parent-owned VW Bug. Living in the Bay Area, we worked as a creative team, building careers in advertising, design and brand development. Our client roster included groundbreaking technology and software companies from Adobe to Microsoft. We were early adopters of everything tech.

Having never recovered from our love of vintage vehicles, we acquired our first ’73 Bay Window VW Microbus in the 80s, but soon replaced it with a delightful 1965 21-window model. Our kids loved packing it with friends and picnics while trekking out to Stinson Beach. But the Bus had geriatric issues and consistently broke down. So wherever we went, we carried a first-aid kit: tools, spare parts, cables and an extra fan belt, along with baling wire and duct tape for repairs on the road. One thing or another always needed attention, but the Bus itself was dearly loved. It was just high maintenance. Even so, we added a 1966 Karmann Ghia to our collection and later, a red 1963 ragtop Beetle.

Whenever we ventured out with the Bus, strangers would wave and stop us to share their VW story. There was a huge nostalgic bond, it seemed, between boomers especially, and these quirky German vehicles.

Eight years ago, we had a wild (brilliant, but unprecedented) experiential marketing idea for Volkswagen of America, a concept designed to leverage the universal love for the classic MicroBus with a VW vision of the future. Yes, a small fleet of 100% electric demo vintage Buses had something to do with it. We pitched the idea to Tim Ellis, then VW’s VP of Marketing. But, as it turned out, our timing was the worst. 2008 was the year that marketing budgets went to hell in a hand-basket and the American economy went into free fall. 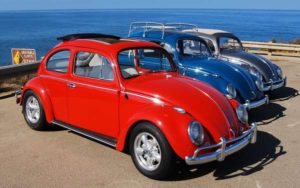 Four years passed. Tesla’s Model S was looming on the horizon, with a smattering of other rather odd-appearing plug-in EVs from Nissan and Mitsubishi. It occurred to us that pairing a beloved vintage vehicle with a modern electric drivetrain could solve many concerns at once, offering performance and reliability unknown to mid-century cars.

Our red ragtop Bug was drafted to become a prototype. We enlisted the talents of EV West, builders of a pure electric (750hp) BMW M3 that had just won the electric street division at Pikes Peak in 2012. Over the next year, we conferred and design-directed the build, somewhat, while continuing to field test and refine all the retrofit mechanical aspects. It featured an electric drivetrain, an upgraded suspension, brakes, lights, and the stock transmission was rebuilt.

What’s that old adage about how necessity is the mother of invention? In our case it’s true. We didn’t start off with the idea of launching a business per se. We just wanted a fast, reliable, fun-to-drive plug-in Bug in OUR garage. Having worked in social media for years, we created a twitter account for @ZelectricBug. And interest just took off. 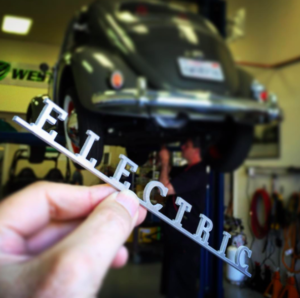 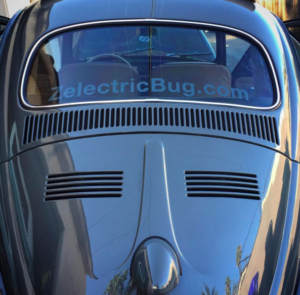 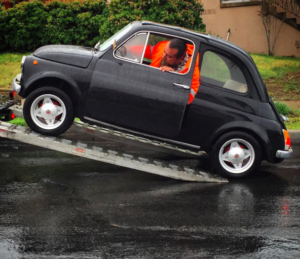 Who is the Zelectric Motors customer and is this, typically, their first electric vehicle?

Whether they already drive an EV or not, our clients are already sold on driving electric. A few years ago, education about the benefits of driving electric was a much larger concern. But that’s changed now that every major automotive manufacturer is bringing hybrids and pure electrics to market. It’s just a matter of time until fossil fuel resources diminish. Air pollution will become an overriding concern. While we don’t anticipate (or want) motorsports to ever become 100% electric, we were delighted to have the 1964 Zelectric Microbus recently featured (doing hot laps) on the track prior to the International FIA Formula-E Race in Long Beach.

Zelectric vehicles are unique crossovers, in that they appeal to both a percentage of EV drivers and a certain percentage of collectible car enthusiasts. Plus, we encounter our fair share of those who theoretically believe in driving electric, but are not taken with modern EVs, citing the fact that the majority look like angry appliances.

In every case so far, the Zelectric becomes an addition to one or more vehicles our clients already have on hand. Modern technology propels Zelectric rebuilds, but the vehicles themselves are highly collectible (never cut or welded) and appear like perfectly stock sleepers. 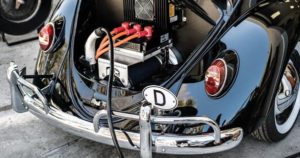 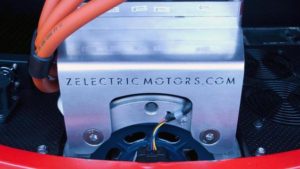 How do design and color come into play with the vehicles you build?

We stick with stock. Our prime directive is to honor the Porsche design legacy created when these VWs were born. That approach also ensures that vehicle values continue to appreciate. So the paint and materials palette used for both exterior and interior is in keeping with how a given vehicle originally looked when on the showroom floor. Minus exhaust pipes, of course.

Mechanical design goes deeper with the Zelectric retrofit, incorporating a number of functional upgrades that, while invisible outwardly, improve performance and make cars 21st-century road-worthy. In the ZelectricBug for example, lithium Iron batteries are contained up front where the gas tank once sat, and completely obscured behind the back seat. In each Zelectric motor bay, minimalist design rules. It all looks super clean and amazingly simple, with all the extensive wiring and connections tucked away, hidden from view. We aspired to achieve production values in the final presentation. If VW did this themselves, what would it look like? So this was, in part, one of our guidelines. 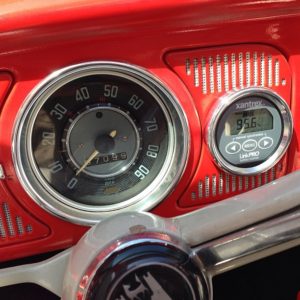 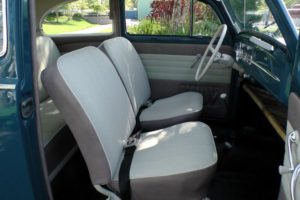 Is there a common customer request that would surprise us?

We receive requests from all over the world to represent Zelectric Motors as a dealership abroad. Also, hands-on test drives are requested by citizens of around the globe, from Europe to India to Australia. The real surprise occurs when someone drives a Zelectric classic for the first time. Instead of the putt-putt chugging along of the flat four engine, the car turns on silently, and seems to actually coast up hills. 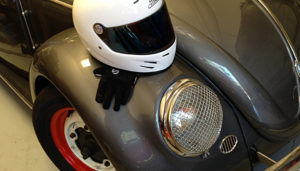 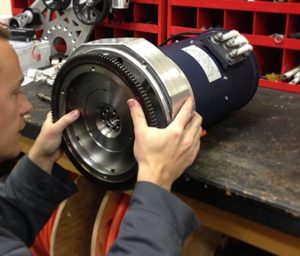 Is brand experience or vehicle performance the biggest draw for your clients?

There are a number of things that typically speak loudest to future drivers of Zelectrics. Some are driven by a desire to be environmentally responsible, to lessen their carbon footprint while driving a surprisingly stylish automobile. There seems to be universal interest in the basic concept of breathing new life into iconic vehicles as well. But honestly, we are accidentally green. We first set our sights on creating a low-to-no maintenance car that would be awesomely fun to drive. We’ve always been early adopters of emerging technologies. So it made perfect sense to quietly update these vehicles for the 21st century. Zelectric clients and fans seem to share those sensibilities. 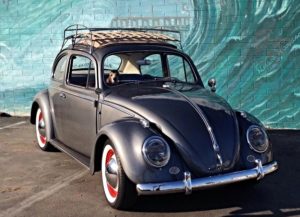 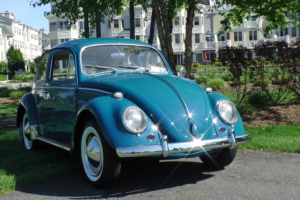 Finally, we’re curious to know if VW corporate has become a fan of Zelectric Motors?

We’ve been lifelong friends with and fans of the Volkswagen brand. So it was particularly rewarding when Volkswagen featured the Zelectric story in Germany’s VW Das Auto Magazine last year.

The typical Zelectric Bug sedan retrofit runs about $68,000. Save your pennies, save gas and check out the one and only Zelectric Motors’ electric car conversions on your next visit to sunny So. Cal.